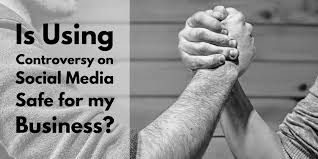 Ben Shapiro: Who Is He And Why Is He So Controversial

Breaking Down WWE’s Most Controversial, Shocking Stories For The Week of Sept. 15th

Protesters Gather At Coliseum Ahead of Controversial Roger Waters Concert

You get the idea. It seems like any idea more complicated than ‘the earth is flat’ gets labelled controversial. Thank god we can all agree that the earth is round.

The word gets used for a reason; the word is deliberately chosen. It’s used to both attract attention and deflect criticism. It says that there are many opinions on both sides of the issue. That you the information receiver will be expected to have an opinion about this ‘controversial’ issue. That there is no objectively right or wrong opinion, and whichever side you choose you can take comfort in knowing there are others who share your opinion.

Editors also do this all the time with question marks in their headlines—designed to draw traffic, designed to attract hits. A Guardian article with the headline Is Harry Styles Really the New David Bowie? should be exactly one word long, two words long if you need to put the word ‘hell’ in front of your ‘no. And yet…and yet…it isn’t.

And that, coupled w/a financial cratering brought about by the internet—is how you end up living through a journalistic age defined by nihilism & fear: the freedom of postmodernity turned back on itself again & again until instead of multiple truths, you end up with so many truths that truth of any kind ceases to exist. And then it’s just down to who can shout the loudest, and wouldn’t you know it, it turns out the people w/the most money have the easiest time being heard.

Truth may be relative, but facts are real as hell.

If anything out there is ‘fake news,’ it’s this gutless shit peddled by established writers & outlets who ought to know better. People like Trump, Hannity, etc. are just taking the free-floating groundless nature of mainstream news reporting (I mean the New York Fucking Times runs ‘climate change is a hoax’ stories on their editorial page) and using it to their own ends.

And there’s nothing controversial about that.