We’ll put this at the top, to make sure it gets read: If you care about working people in this country, never, ever, ever, ever, for any reason, ever cross a picket line. Do not buy anything from a company that has employees on strike. Ever. Please. 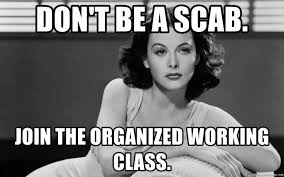 That information is relevant today.

Because this is America, and employers don’t do anything moral or humane unless somebody forces them to, workers at Instacart have gone on strike. They would like to have hand sanitizer, some wipes, sick pay, and maybe a raise. Here’s a sample from their statement:

For the past several weeks, Instacart Shoppers and Gig Workers Collective have been urging Instacart to take proper safety precautions. We have been ignored.

Instead, Instacart has turned this pandemic into a PR campaign, portraying itself the hero of families that are sheltered-in-place, isolated, or quarantined. Instacart has still not provided essential protections to Shoppers on the front lines that could prevent them from becoming carriers, falling ill themselves, or worse.

These seem very reasonable given that their job just went from slightly exploitative & dystopian to extremely exploitative & dystopian. People signed up to deliver groceries, not life-threatening illnesses. You would hope that Instacart would have done this without anyone even having to ask, the way the Marriott I parked cars for in Boston used to provide a cooler of bottle water for us when the temperature broke 90 degrees in the summer (Thanks, Kirk!).

That was back in 2002. For all I know, Marriott dresses everyone in wool turtlenecks because some consulting firm they threw $10,000 at told them it would enhance customer’s experience or some shit. What I do know is that Instagram’s–how should I put this–murderous disregard for the lives of their employees–is pretty much the standard for people in the service industry (my career 1991-2016).

An Amazon warehouse in Staten Islandsaw its workers go on strike earlier this week, and Whole Foods employees are staging a “sick-out” today. Both companies are owned by Jeff Bezos, who made, on average, $107,000,000 every single day last year. Like their brothers & sisters at Instacart, the folks at Amazon and Whole Foods had noticed that their jobs were suddenly a lot more important, and a hell of a lot more dangerous, than they were a month ago.

“I touch over 2,000 different items every day I work there. I have to grab products out of the shelf and put them in the bins. … And I’m not wearing any protection,” said Terrell Worm, one of the thousands of workers at the Staten Island warehouse. “Amazon says we’re all a family there. If they really saw us as family, they’d care about keeping us safe and keeping us home.” (NPR)

Amazon has seen workers in 11 different warehouses test positive for The Rona, and they had to shut one down in Kentucky because it got so bad. Naturally, Amazon has responded to all this by firing the guy who led the Staten Island strike, and refusing to disclose to the media whether anyone there had tested positive for the virus.

What these companies all have in common, besides treating their workers like animals, is they will only offer sick leave if you test positive for the virus and get a note from your doctor–a neat trick considering almost none of them have health care, and Coronavirus tests aren’t exactly available at your local Dollar Tree. My most recent job, where I transcribed dictated notes from people in the finance and insurance industry played the same game. If you got sick, you didn’t have to make up the lost hours if you provided a doctor’s note. Sure, I’m going to, while sick, go drop $50-ish on a doctor’s visit in order to avoid making up the hours I’m already losing by being sick in the first place. Funny enough, I was due to go back to work there–after a two-month leave of absence to finish the book that was supposed to come out this year–the same Monday that they cancelled local schools. Last I heard, they were still open, a room filled with people coming in and out and typing on shared computers.

I’m sure you’re a caring person. Here are some ways to contact Instacart, Amazon, and Whole Foods, and let them know you’re on the side of the workers.

Scott Creney lives in Athens, Georgia. He is the author of "Dear Al-Qaeda: Letters to the World’s Most Notorious Terror Organiztion".
View all posts by ScottCreney →
This entry was posted in Blog and tagged amazon, coronavirus, instacart, strike, whole foods. Bookmark the permalink.