They moved into our neighborhood a few months ago, the house across the street and to the right. The man came and rang our doorbell to introduce himself. He and his wife had just moved here from California with their grandson. I shook his hand. I told him I lived in California from age 13 to 26. They had been living in one of the inland valleys near San Francisco ; I had grown up in one of the inland valleys near San Francisco. Their grandson was going to be attending Hillsman Middle School. I told him not to believe everything he heard about our public school district.  We have a lot of great people who work really hard, and care a lot.

Over the next several months, we would see them outside a lot. We would wave. We would occasionally stop and chat. They put a lot of work into fixing up their house. I told them it looked beautiful. When the quarantine went into affect three weeks ago, we maintained a respectful six-feet-plus distance as we talked. I told them if they got sick and needed anything to let us know, and we’d do anything we could to help them. They thanked me. Later that afternoon, his wife left a present for our son in the mailbox, a bunch of crafts and coloring books to help keep him busy. Our son made a thank you card and put it in there mailbox.

Three days ago, we were driving home from dropping off some food for a friend of ours when we passed this flag in their yard. 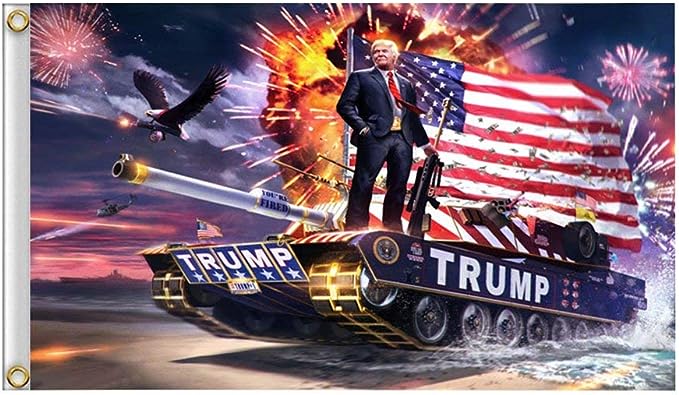 It is three feet by five feet, hung between the two trees in their front yard closest to the road. My wife gasped when she saw the flag. There’s a lot to gasp at. The timing alone–this hasn’t been what you would call, the president’s best month–is shocking. I still keep wondering why now? Is it the daily TV briefings? They have been watering their lawn a lot lately…

If it had been a campaign sign, a generic TRUMP PENCE 2020, it would have been a little disappointing, but it wouldn’t have affected me that much. I try to save my anger for the powerful people–the ones who do the confusing, not the ones who are confused. But this flag (available for $6 on Amazon, according to my research) disturbs me. It’s insane. It’s unhinged from reality. Just like the man on the tank, there are so much bullshit going on here, so much delusion, so much ridiculousness, that the idea of listing it all out just feels exhausting.

So let me just pick out the most obvious. That cowardly, draft-dodging motherfucker has never come within 20 feet of a god-damn tank. And he would piss his pants if a firecracker went off around him, never mind an explosion. I guess that’s what pisses me off the most about this flag. My dad fought in Vietnam in the Air Force. One of his brothers was in the Marines, another was in the Navy, and I forget what the other brother did. My mom’s brother went to Vietnam. So did most of the boys she went to high school with (Brockton High in Massachusetts–not a prep school). All of my uncles got to see explosions up close and personal. They all made it back alive, but none of them made it back undamaged.

I haven’t talked to my neighbors about any of this yet. They haven’t been outside as much lately. I know it’s going to happen at some point. When it does, I hope I’m able to joke about it, that I don’t get angry and start yelling. I wonder what the other neighbors think of their flag. We live in a pretty diverse neighborhood. I wonder if their flag will embolden other flags. We talked about putting up a flag of our own. I suggested one of me standing on top of a big pile of money, because I have as much experience with that as Donald John Trump has standing on top of a fucking tank.

All joking aside, that flag is an abomination. It’s the kind of  thing you see in totalitarian societies, the deification of a leader.

Whatever your feelings about DJT, he’s just the president, a mere elected official. Aside from the scale of his job, it isn’t any different than what your local mayor does. But if you put up a flag like this with your mayor on it, everybody in town would fucking laugh at you. This flag across the street from us is a pathetic act of subservience. You turn your president into a god in the hope that you will have blessings bestowed upon you. It’s the fascist personality all over again. A mouse puts up a picture of a lion in the hopes that others will see them–and they will be able to see themselves–as a lion.

I’m not scared of my neighbors. I’m scared of all the other mice in the world who dream of becoming lions. If I woke up tomorrow and saw seven more of these flags hanging in our neighborhood, outside different houses, that would be absolutely terrifying. Because as deadly as coronavirus is, the virus of fascism is even worse.

Scott Creney lives in Athens, Georgia. He is the author of "Dear Al-Qaeda: Letters to the World’s Most Notorious Terror Organiztion".
View all posts by ScottCreney →
This entry was posted in Blog and tagged coronavirus, cvid, flag, trump. Bookmark the permalink.