I’ll just go ahead and say it. I hope Boris Johnson dies from the Coronavirus. In fact, as long as I’m wishing–and I should probably point out here that my wishes have shown zero ability to influence future events–I hope someone lights his body on fire and pisses on him just before he kicks it so his death will be extra painful. It’s not so much that I think he’s a terrible person, with terrible policies, who has actively made the world, and a country I love, a worse place (this includes his party’s decade-plus defunding of the UK health syste and his do-nothing response to the virus, both of which are the political equivalent of murder). I also feel the need to counterbalance the sudden outpouring of “well wishes” I see out there from people, even friends of mine, who have to this point despised him.

Me, I don’t believe in civility, or high-minded public displays of kindness. I believe in justice.

And while I appreciate the “cosmic irony” in Johnson’s imminent death–guy mocks virus, virus kills the guy–that’s not enough for me. This also goes for Donald Trump, another person I would like to see die. It’s not about their policies. It’s not even about their own personal shittiness, a foul stench of vile corruption that pollutes this earth as surely as any radioactive waste.

No. For me, this is about me staying inside, maintaining a six-foot distance from everyone who isn’t my wife or child, and wearing a mask to the grocery store that my wife made out of a pillowcase. I don’t mind doing those things (they’re genuinely helpful! and my mask looks cool!), but I’ve noticed that Trump, and BJ, haven’t been doing any of that stuff. They think they’re better than the disease. They think they’re better than me–and better than you. They think the rules don’t apply to them. That might be the closest thing to a personal ethos that either of them have–the rules don’t apply to me.

It’s not that I even care about my own death, or think my life is more valuable–or even moral–than theirs. It’s just that the death of Boris Johnson and/or Donald Trump would allow me to believe there’s still some kind of functioning cause & effect in the universe. It would allow me to believe that our actions actually matter, and that consequences for those actions are real.

Just so we’re clear. The death has to be from Coronavirus, or something related, like say, Trump overdosing on hydroxychloroquine. If a nurse were to, say, “accidentally” unplug BJ’s ventilator, that wouldn’t satisfy my thirst for justice. If a person were to cough their virus molecules into Trump’s face, that wouldn’t do it either. I’m simply asking for things to unfold naturally, the way they’re supposed to happen. Any world where a powerful leader can respond to a crisis like this: 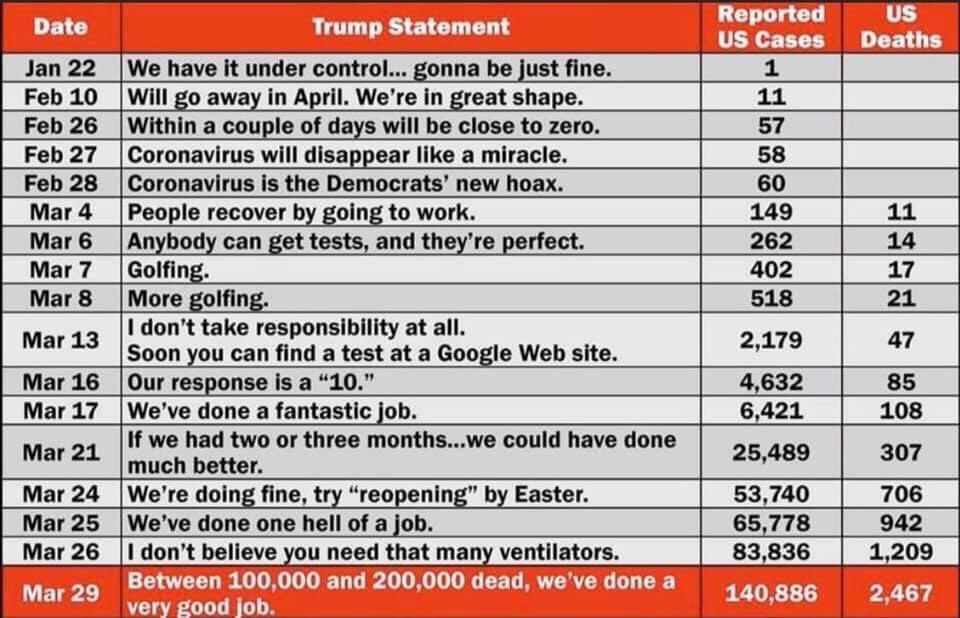 …and that guy doesn’t die from the virus is a world I have serious questions about.

How am I supposed to teach our young son that he should “do the right thing” and “be a good person” if what he does doesn’t matter? Every breath Trump and/or Johnson continue to take only undermines whatever ethical framework I’m trying to teach to my kid. All he has to do is point at one of them and say, “But what about that guy, dada? He’s a fucking piece of shit, and he gets to do whatever he wants.” I have no response to that, other than he should probably cut back on the cursing.

But if the two of them were to die…

I don’t wish for the death of Trump and/or Johnson because I’m selfish. I just want my son to grow up to be a good person. Someone not like his father.

Just remember, everyone. If you’re a politician who votes for laws & policies that you know will result in people’s deaths, you’re someone deserving of respect and sympathy. If you’re a writer impotently wishing for the death of two (and only two!) political leaders, you’re considered something far, far worse. You’re considered cruel.

Scott Creney lives in Athens, Georgia. He is the author of "Dear Al-Qaeda: Letters to the World’s Most Notorious Terror Organiztion".
View all posts by ScottCreney →
This entry was posted in Blog and tagged Boris Johnson, coronavirus, cvid, Death, trump. Bookmark the permalink.