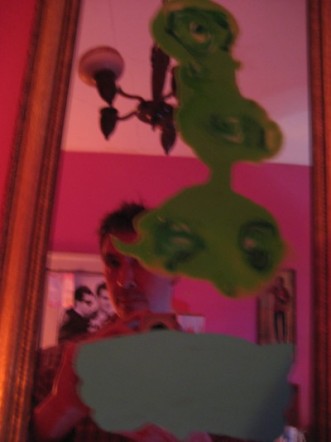 My writing’s been published in a bunch of places over the past 10+ years. In addition to the books Dear Al-Qaeda: Letters to the World’s Most Notorious Terror Organization (Black Ocean 2006) and Nation Full of Caesars (Eye For An Iris, 2004), my non-fiction has appeared at Collapse Board, The Fanzine, Ablaze!, Clash Music, Boston’s Weekly Dig, and some other places I’m probably forgetting at the moment–ten years is a long time. I’m currently working on a series called Trout Fisting In America, a dark dive into the US psyche that, as much as they liked it, was too, uh, controversial for my usual haunts. Go figure.

I appeared in a BBC radio documentary about Nirvana, and I also play (a very minor role) in this band Tunabunny, that’s been talked about by NPR, MTV, The Quietus, and a bunch of cool places. And oh yeah, I once sang karaoke to 40,000 people in Chicago and provoked 30,000 of them into booing me before they cut my microphone.

I’ve written a bunch of other books that haven’t been published, so either I’m not as good a writer as I think I am, or my style’s at odds w/the marketplace. Or both. It could be both. Anyway, poke around and see if there’s something you like. Send me your thoughts at scott_creney@yahoo.com. I’m always interested in people’s thoughts.

Oh, one last thing I should mention–my last name is pronounced with a short e, so it sounds like ‘Penny.’ I understand this is inconsistent with the rules we learned in elementary school regarding vowel/consonant placement, but you can blame my distant fugitive (possibly drunk, probably violent) Irish ancestor who changed it from Carney for reasons that are lost to time.